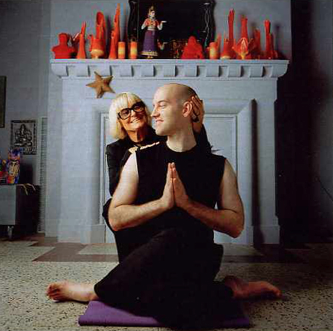 Barbara Hulanicki, 68, opened the first Biba shop in 1964 with her late husband, Stephen Fitz-Simon (Fitz). By 1973, Biba occupied six floors on Kensington High Street in London, selling clothes, food and household goods and featuring a beauty salon, restaurant and concert hall. Before it closed in late 1975, the store had become a celebrity hangout, and 200,000 people a week shopped there, making it the second most visited destination in the UK, after the Tower of London. Barbara, now an interior designer, lives and works in Miami. Her only child, Witold, 37, is a yoga instructor living in New York. They are collaborating on a book — Yoga: Practice and Play.

Fitz and I met and married within six weeks, and everyone said it was a shotgun marriage and it wouldn’t last. Then no baby came for six years. There was no real difference between home and work for Fitz and me, because the shop was our life. So when Witold was born, he came along too. He became a Biba baby — I designed a children’s-wear line for him and we sold terry nappies in black and fuchsia and purple. This was at a time when babies exclusively wore itchy, knitted things in horrible pastel colours.

It’s difficult to imagine now how starved for fashion we were. I scoured London for black pumps like the ones Audrey Hepburn wore in Sabrina Fair. There was nothing that wasn’t brown with an ugly heel. Clothes were dreary and awful, and they came in terrible colours like royal blue, red and beige. Girls dressed like their mothers or they made things at home from patterns. The demand for cheap, fashionable clothes was overwhelming. We’d stock the rails, and by 11am they’d be empty. We grew up with our customers — later they dressed their babies in Biba Baby and bought their washing powder and cereal from us. We sold whatever we liked, really. We were selling a lifestyle before anyone had come up with the concept.

In the early 1970s we ran into financial difficulties and sold majority shares to Dorothy Perkins and British Land [the property group]. That was our downfall. Later, we tried to buy them back, but BL refused. It was agonising, because BL wanted us out of the picture. I was banned from entering the building. It was so painful — Biba was our life.

We discussed things in front of Witold far too much. He was being sent home from school with terrible headaches and throwing up everywhere. A paediatrician asked: “Do you discuss your business worries in front of him? Well, stop it. He’s taking it all in.” After that, we were much more careful to keep this outpouring of emotion, this grief, to ourselves.

The only solace was that BL hadn’t been able to make Biba work; because they didn’t understand what it was all about, they killed the thing stone dead. In 1976, Fitz and I decided to go to Brazil to start an export business. Such a nice, glamorous place, we thought. I remember arriving in São Paulo and spending the first night in this hole of a house on a hill. I thought: “Jesus Christ, what have we done?” But Fitz was incredible. He was this very straight but very rebellious Irishman, and by the end of our first day he had his first deal.

When Witold went to the States to study film, we followed him. I feel a bit bad about that. I think I may have encouraged him to do film. Anyway, it wasn’t his thing. He was stressed out and hated it. It’s interesting to see how happy he is now.

I always thought I would die before Fitz. He was 60, looking marvellous but feeling tired and suffering from sciatica that wouldn’t go away. His osteopath suggested a scan, and when I went to collect him, a very young doctor said: “Your husband has six months to live.” He had lung cancer and spots on his brain. When Fitz was dying, I barely slept, and Witold was the strong one.

Three months later I was also diagnosed with cancer, and I rang Witold and said: “Guess what I’ve got.” It was totally the wrong thing to do; he just fell apart. I realised he wasn’t as strong as he seemed. And I thought: “It’s my duty to stay alive for him.” He had a bit of therapy and, in the end, coped very well.

I’ve tried not to be a pain in the neck, but it was hard at first, because I felt so hopeless. For 35 years, Fitz did everything. I think my relationship with Witold is pretty balanced now, because we rely on each other. He’s just like his father. Same mind, same sense of humour. He’s well read. I ask his advice on all kinds of things. The older I get, the more open I am to whatever is out there. Losing Fitz has taught me there is no tomorrow, there’s just today: you have to grab whatever comes with both hands.

To me, walking into Biba was like entering a dark, chocolate-covered cave. My mother was in the workroom at the back, designing, and there were all these scraps of fabric and cardboard tubes lying around, which became my toys. Apparently, I played with Chastity Bono [the daughter of Cher] and a bunch of rock stars’ kids. But if I did, I wasn’t aware of it.

A couple of years ago, Mum and I went through her storage and pulled out all this Biba stuff. While it was completely familiar to me, I could see that what she’d done was extraordinary. It was creative and fun, and after all these years it’s still exciting.

The funny thing is that, although we’ve got loads of the photographs and catalogues, she hasn’t been careful to keep any of the clothes. There are a few dresses in my godmother’s loft, preserved in pigeon shit, but that’s it, apart from a single platform shoe and a couple of well-worn fur coats. The point was that it was all disposable. They made things cheaply in 10 colours and turned them over fast.

My dad used to tell this story about shrinking miniskirts. Cotton-knit jersey has to sit for a while before it’s sewn, because it’s been stretched from the loom. The turnover at Biba was so high — Dad could turn one of Mum’s designs into a garment in one week — that there was no time to let the fabric rest. Consequently, the skirts carried on shrinking on the hanger, and the shorter they got, the more they sold.

Biba was a brand before anyone had come up with the concept. I look at Gap, Banana Republic, all these lifestyle labels, and I think: “My parents did that.” But Mum couldn’t have done it without Dad, and vice versa. She was the design visionary and he was the business brains. People would say, “You can’t do things that way,” and he would make it work. In fashion, the mark-up is usually very high. Biba’s mark-up was tiny; it only worked so well because they shifted unbelievable amounts of stuff.

The end was terrible for them. Mum got cut out of the design process completely. The BL directors’ wives would turn up in their little hats and white gloves, and turn their noses up at everything. Twice, Mum and Dad raised enough money to buy the business back, but they were turned down. I think Mum had to let Biba go for her sanity.

We left London and arrived in Brazil at the height of the military junta. My dad was always a great adventurer. My theory is that they used my education as an excuse to move. They decided I needed to go to boarding school in Bath. When I went to study film in the States, they followed me. The film business is extremely stressful, and I was being yelled at for 9 or 10 hours a day. My hair was literally falling out, and I took up yoga as a means of relaxation. Five years later I made the jump and became a teacher.

Mum didn’t understand the yoga to begin with, but after a while she saw how much happier I was, and now she really gets it. She’s even done a few classes on the beach. I would never have done this when Dad was alive. It was only when he died that I started to look inside myself and become my own man.

The day after Dad died, Mum and I sat and watched Absolutely Fabulous and laughed and cried and we just got closer and closer. She has grown so much since then. She’s incredibly strong, very independent. She just doesn’t have inhibitions. When she first started doing interiors in Miami, using loads of colour, people were up in arms. Now everyone is doing strong colour. The locals don’t know what to make of her, which I think she enjoys. She’s unmissable. She still dresses from head to toe in black — always, even in the heat of Miami.